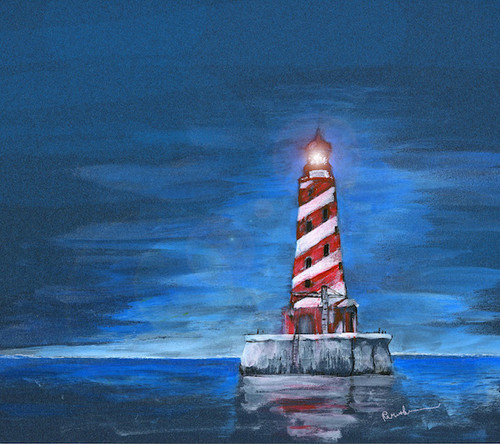 White Shoal Lighthouse art print by Michigan artist and author Richard Rensberryrepresents the lighthouse at night.  It was painted in liquid acrylic ink on paper.

White Shoal Lighthouse is located in Northern Michigan, 20 miles west of the Mackinac Bridge.  This 121-foot lighthouse can only be seen by boat and marks a hazardous area in Lake Michigan.  White Shoal Light was built in 1910 to replace Lightship No. 56 that had marked the shoal since 1891.  Lightship No. 56 was one of the first three lightship stations in the Great Lakes.

The lighthouse is built on a massive concrete base.  Construction of the light was considered a major engineering feat because of its isolated location.  The station contains a fog signal and keeper's quarters.  The quarters were used until 1976 when the light was automated.

The light is the only red/white barber pole striped station in the United States.

The Best of Me from a-z for Kids